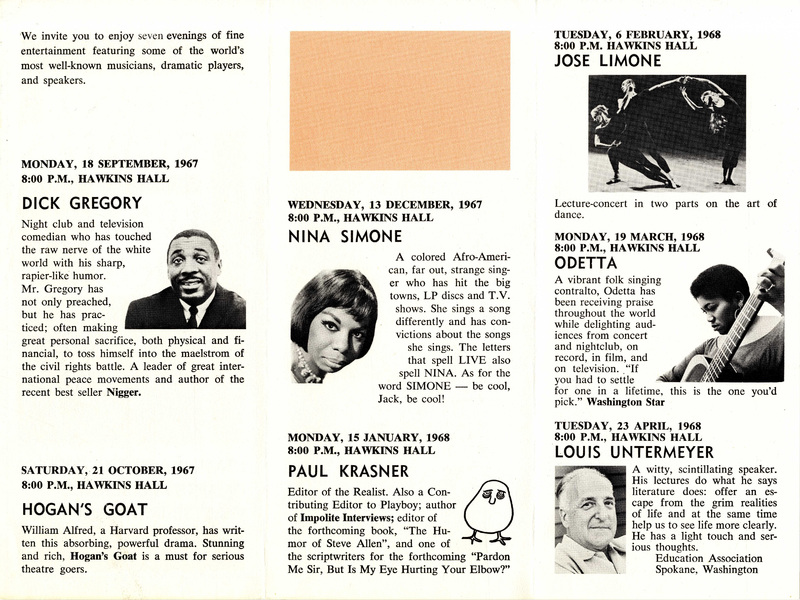 We invite you to enjoy seven evenings of fine entertainment featuring some of the world 's most well-known musicians, dramatic players, and speakers.

MONDAY, 18 SEPTEMBER, 1967
8:00 P.M., HAWKINS HALL
DICK GREGORY
Night club and television comedian who has touched the raw nerve of the white world with his sharp, rapier-like humor. Mr. Gregory has not only preached, but he has practiced; often making great personal sacrifice, both physical and financial, to toss himself into the maelstrom of the civil rights battle. A leader of great international peace movements and author of the recent best seller Nigger.

WEDNESDAY, 13 DECEMBER, 1967
8:00 P.M., HAWKINS HALL
NINA SIMONE
A colored Afro-American, far out, strange singer who has hit the big towns, LP discs and T. V. shows. She sings a song differently and has convictions about the songs she sings. The letters that spell LIVE also spell NINA. As for the word SIMONE - be cool, Jack, be cool!

MONDAY, 15 JANUARY, 1968
8:00 P.M., HAWKINS HALL
PAUL KRASNER
Editor of the Realist. Also a Contributing Editor to Playboy; author of Impolite Interviews; editor of the forthcoming book, "The Humor of Steve Allen", and one of the scriptwriters for the forthcoming "Pardon Me Sir, But Is My Eye Hurting Your Elbow?"

MONDAY, 19 MARCH, 1968
8:00 P.M., HAWKINS HALL
ODETTA
A vibrant folk singing contralto, Odetta has been receiving praise throughout the world while delighting audiences from concert and nightclub, on record, in film, and on television .. "If you had to settle for one in a lifetime, this is the one you'd pick." --Washington Star

TUESDAY, 23 APRIL, 1968
8:00 P.M., HAWKINS HALL
LOUIS UNTERMEYER
A witty, scintillating speaker. His lectures do what he says literature does: offer an escape
from the grim realities of life and at the same time help us to see life more clearly. He has a light touch and serious thoughts. --Education Association, Spokane, Washington